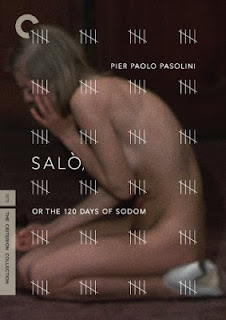 A movie this week I don't think I would have ever chosen to watch having read the premis.  That's the good thing about doing these movie challenges, you get to see movies, you would never otherwise have watched.

I'm not going to do a blow by blow account of the movie.  This is the Swedish movie made in 1960, that 'Last House on the Left' was based on.  Although there are very good things to be said about both LHOTL movies (1972 and 2009), this movie is an altogether different experience.  Whereas I would describe its successors are exploitation movies, this is not on any level.  Its a deep movie that makes you think, that does disturb you, but in a different way.

To start with the cinematography in this movie is just beautiful!  It is a joy to watch aesthetically.  From a story point of view its heartbreaking.  We see the young, beautiful, but very naive and innocent daughter (Karin) of a religious couple raped and murdered by 2 herdsmen when she is delivering candles to a church.  This is all witnessed by her pregnant adoptive sister and maid (who is stunningly beautiful it has to be said) and a young boy who is with the herdsmen.

This week, I watched our scheduled move one Sunday (the first 'legal' day) which I thought would give me plenty of time to write a review... But every day I've sat down, determined to put fingers to keys (or thumbs to touch screen) and come up with... Nothing; so here I sit, Friday night, still trying to think of enough to say by Saturday.

It's not that the film was bad, as such; it was certainly well shot, and there's lots here for film students and media studies types to get all chin-stroky about... But that's not my thing.

In its day, I'm sure the matter-of-factness of things like the rape scene and the fathers subsequent revenge were a revelation. I can see that the lingering, thoughtful shots, the way the camera stays behind the father, allowing him to stand in the distance and contemplate what he has done, would have been, in 1960, a revelation to many film makers, and I understand that they have shaped movie making in a way we still see today.

But that's the problem; we see them today. All the time. By being innovative, it's methods have become the norm; 53 year later, they don't seem so impressive.

So the movie has to stand on it's own two feet, in 2013, as a piece of entertainment. And it doesn't.

Like every rape-revenge movie that has followed it, 2/3rds of the film pass before we get to the 'rape / revenge' part; Until that point, it's a fairly run-of the mill medieval set black and white drama about a religious 'Lord of the Land' type, and his household; the type of movie I used to find my gran watching on channel four on a Sunday afternoon (and think 'why?').

Unlike it's more recent copy-cats, the revenge when it comes is swift, and matter of fact; yes it's brutal, but at the same time it's over far too quickly to have any real impact, or (to me at least) satisfactory emotional payoff.

But perhaps that's the point; if we consider the closing scenes of Wes Craven's quasi-remake (last house on the left), we see there too that the 'revenge' chi ever nothing of note - the family remains incomplete and broken. Maybe that's how it should be.
Unlike Last House, The Virgin Spring continues to follow the father for a shot time after his revenge, to show us the emptiness, the realization that he has done things he perhaps should not. As a very religious man, we see him try to reconcile the events of the movie, both his daughters ordeal and his own reaction, with his faith; that's potentially interesting, but was for me too calm and easily resolved (or accepted). There was also a small supernatural element, which to me felt out of place.
So there it is, it's beautiful, but dated and a little dull; I wouldn't mark it 'avoid', as I like to reserve that for films I feel completely wasted my time, but I'm a long way from recommending it.

As I wrote that last paragraph, it occurred to me that maybe there's a reason that both of those films have a very direct remake; where as there is only one Virgin Spring...

Posted by Will "Pyro" Tingle 2 comments: 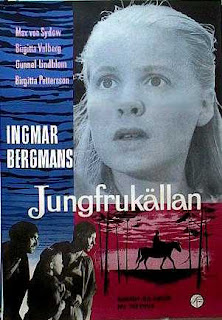 In much the same way as the second installment in our 'Texas Chainsaw' series was much removed from the original, this movie is even more removed.

The only original characters we seem to have are Leatherface himself and the notion of 'Grandpa' who is a mummified corpse who sits at the dinner table, but is inexplicably fed blood by his 'family'.  Do they think he's alive???

This movie predominantly follows the characters Michelle & Ryan as they travel across country (passing through Texas) to deliver a car to Michelles dad.  As they travel, they pass through a police checkpoint where a mass grave has been found containing bodies in various states of decay.  To us the viewer, this obviously makes it clear to us that we are nearing Leatherface territory.

They decide to stop at a secluded petrol station (appropriately called 'Last Chance') where they meet a rather nasty, slack jawed idiot (Alfredo)with creepiness and perversion hanging out of him!  Things do seem to be getting a bit sinister when a handsome stranger comes to their aid in the form of Tex (Viggo Mortensen... ey up!!).  He helps them avoid a potentially disasterous outcome, even though they refuse to give him a lift to where he's going.  As they leave, Alfredo shoots through their back window and is seen to shoot at Tex.  Michelle and Ryan think he's possibly killed him... (I noted they didn't go back to help him though!)

And so, the law of diminishing returns rings true...

Only the first film is mentioned in the opening crawl (ignoring the 2nd), and Leatherface is the ONLY returning Sawyer, transplanted inexplicably into a new family! (well, a grandpa is in it now, it may be the same one, but he's dead either way).

This time out (as hinted in the title) the goal is clearly to take Letherface to franchise, and pretty much abandon the TCM legacy.

And it fails.. miserably. 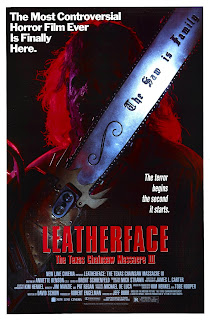 Tobe Hooper returns to pull directorial duties; making the massive shift in tone from the original all the more baffling.

This time the terror element is toned down, while the dark comedy element is ramped way up; not that dark humor was absent from the original, but it was a lot more subtle; also the blood is upped this time (hardly surprising as the always reliable Tom Savini has been brought in for makeup effects) .

More serious than the change in tone, is the change in characterization which plagues the film; once it's in full swing, Bill Johnson is superb as Letherface, although his earlier scenes show an enjoyment to the killing and teasing of his victims which was not present, likewise Jim Siedow returning as Drayton (simply 'the cook' in part 1) now revels in the violence that he previously couldn't bear to be around; it's worth noting however, that in both cases the script, rather than the actor, is at fault.

As I started with this weeks movie, I knew I had seen it before, but oddly I remembered absolutely nothing about it whatsoever.  Probably not the most promising start.

So with TCM being one of my favourite movies, the sequel had a lot to live up to.  Did it?  Sadly not on any level.  Where do I start?

My favourite aspect of the original movie was the mood, the cinematography, the eeriness.  These were all missing in the sequel.  In fact taking the characters aside, you would be pushed to realise these 2 movies had anything to do with each other.  Where the first movie had aspects of black comedy, which has its place in horror movies when executed well, this movie was just ridiculous.  It was over the top, silly, mad and attention seeking.
CLICK HERE TO READ MORE
Posted by Lisa 1 comment: 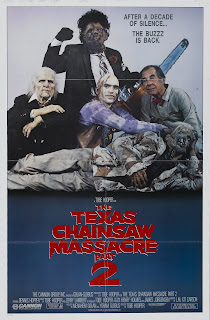 What can I even begin to say about TCM that hasn't already been said?

Unoriginal though this sentiment may be; the first thing I'm going to say is 'if you haven't seen Texas Chain Saw; go watch it'. Although that seems a little redundant; if you like horror movies enough to have found yourself on the corner of the interwebs where people watch one every week, then you have almost certainly seen this one a couple of times already!

With that in mind, I'm not going to be especially mindful of spoilers from here on in.
CLICK HERE TO READ MORE
Posted by Will "Pyro" Tingle 3 comments:

This week I had the priviledge of watching one of my favourite horrors - Texas Chainsaw Massacre.  Bit of an odd way I first saw this one.  I never fancied it as I've never been a 'Slasher/Gore Fest' fan... that's not to say I don't like a bit of gore, I just like a story with my gore... something to make me think.  I came home one night quite late, switched on the TV and this one was on.  I was completely transfixed and unable to take my eyes off it.  When it finished, I got my hands on a copy so I could watch it in its entirety.

So we've established I love it.  Why should you watch it?  This movie is gorey in places, yes, but not anywhere near as much as you'd expect.  It has an uncomfortable, eerie feel all the way through.

Without going into too much detail, a group of young friends (Sally, Franklin, Pam, Jerry and Kirk)are travelling to visit Sally & Franklins grandfather as there have been reports of vandalism.  During this process, they pick up a derranged hitchhiker who they manage to force out of their van after he slashes Franklin (who happens to be in a wheelchair) and himself.  This is merely an introduction though, as he appears later with greater relevance.

They then stop at a petrol station, but find the pumps empty.  They head onwards towards Sally & Franklins grandfathers home.  Pam and Kirk are out together when they stumble upon a house where they mean to ask about where to get petrol.  We have the old chestnut of the door being open but no-one answering.  Why oh why do people always go inside?