Right up front, I'm going to stick a big fat "Will Recommends" on this. If you haven't seen it yet, go do so; don't read this review, and don't read any publicity materials. In fact no: make sure you have seen at least the first 2 original Evil Dead

Still here? You've hopefully already seen the film then, so this will be less of a review, and more my side of a discussion about why it was clever / great.

One more thing - did you watch the closing credits? All of them? If not; back you go... I'll wait.

This week, the 2013 remake of Evil Dead, again starring Bruce Campbell.  A group of young attractive types who go to a cabin in the woods and upon stumbling across the Necronomicon (book of the dead) they manage inadvertantly to release evil spirits.  All kinds of hell, possession and murder ensues.

That's not to say this is a bad movie, it is far from it.  It is enjoyable enough as a stand-alone movie.  It's when you start to compare it to the original that we encounter problems.

Sadly none of the cast (apart from Campbell) are memorable and although the movie is not played for laughs like the original, there are parts which will genuinely make you giggle (which certainly was not the intended effect).  The gore is a bit OTT and what a human body seems able to take before expiring is indeed inhuman!  I suppose believability is not something one should expect from a movie about possession and the evil dead, sadly though, I do.

Within The Woods - Will's Review

I struggle to get a full length review from most 90 minute movies, so how well I'll fair with a half hour student film, we shall see...

But of course, this isn't just any 30 minute student film... This is Sam Rami's, Bruce Campbell staring, student film, about 4 friends who head off to a cabin in the woods, where they disturb an ancient evil; in other words this is Evil Dead 0: The Prototype.

Within The Woods - Lisa's Review

A novel one this week.  A mere 32 minutes long and a short movie by Sam Raimi that went on to be remade with a significantly larger budget as Evil Dead.

It starred mostly Mr Raimi's friends, but he was lucky enough to have Bruce Campbell in it also!!  (not that you would know... he shows none of his characteristic massive persona in this offering).

This movie was released in 1978 and any surviving copies are very difficult to watch due to the quality of the recording.  It is available on Youtube if you want a nosey.

What can I say?  I thought that mostly it was gawd awful.  Dated in a way that is difficult to get past (for me at least) and with a budget soooo low, you wonder how on earth he managed to get funding for Evil Dead. 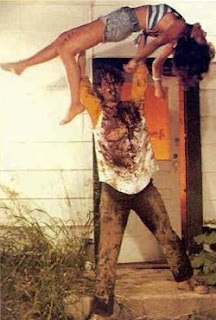 Welcome to the Jungle - Will's Review

The makers of The Blair Witch Project cited the original Cannibal Holocaust as a major influence - it seems strange then, that this (supposed - more on that later) Holocaust remake shares more DNA with Blair Witch than it does with its own direct ancestor.

Welcome To The Jungle - Lisa's Review

So this movie brings us back to our original 'Video Nasties' challenge, as it's a remake of banned movie Cannibal Holocaust.  I wasn't a fan of the original movie, mostly due to the use of footage with real animal deaths, something I abhore.  Lets see how I got on with the movie minus the animal nastiness.

When this movie started and for the first 20-30 minutes, I thought it was going to be quite good.  A decent amount of time is spent introducing us to the main 4 characters, giving us an idea of personality types, how the individuals are linked and allowing us to form opinions and have the potential for empathy later in the movie.

We have 2 couples (the established one having been together for 2 weeks, the other having just met) who decide to head from Fiji to the jungle outside New Guinea to attempt to locate Michael Rockefeller, son of New York Governor who disappeared in 1961.  Obviously with the area being full of indigenous tribes and there being armed criminals enroute, this is quite a dangerous jaunt. 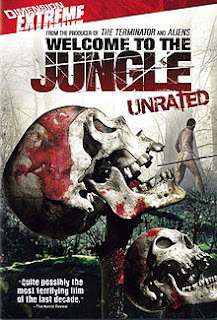 Another tough one this week, as we have very little in the form of plot to comment on.

In the middle of a divorce, advertising director, Paul (Peter Fonda) decides to experiment with LSD. Quite sensibly, he decides to take his first trip in the company of a sober friend, John, who uses the drug himself.

This weeks movie review is going to be very short as I could make sod all sense of it.

To me this movie is simply a string of weird, unrelated scenes all mashed together with really irritating 60's trippy music and psychedelic overlays.

The story here is one of a young guy called Paul Groves (played by Peter Fonda) who is rather depressed to be going through a divorce.  He makes a decision to embark on an LSD trip under the guidance of his friend John, an advocate of the drug. 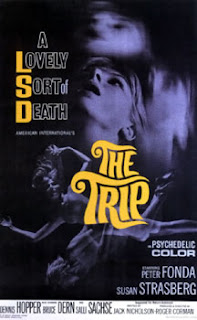 Oh, what to say about this one? While the original was no masterpiece or summer blockbuster, one still has to question the wisdom of a bunch of amateurs re-making it on a budget of 27p; watching it though, that appears to be what has happened.

There are sometimes weeks when the movie isn't that hot, sometimes it's awful and sometimes we are very tempted to write "This was absolute shite" and leave it at that.  Sadly, for me, this was the latter.

This movie is a remake of 1980 movie of the same name (removing the 2000).  While the original movie wasn't all that hot, this one is just absolute bollocks!  I suppose I should elaborate as to why I felt this was the case?

I'm not going to go into detail as to the premise, as I very much doubt anyone will want to see this movie on the strength of my review.  Man kills his wife when she refuses to let him eat their dead child to survive after an accident at sea.  He eats them both and then goes mad and kills and eats other people.  That should about sum it up for you.  Why didn't I enjoy it?

The acting was probably amongst the worst I have seen.  The gore looked like something a GSCE art student produced (that's probably an insult to GCSE art students).  Victims are replaced with what looks like a rubber model of themselves (that bears absolutely no resemblance to them) and then over the top, unrealistic, ridiculous gore is spattered upon us.